If you've missed past Expert Briefs, you can click on the undies to see them all –>

Pinterest is a hot topic around the web lately, so this week I asked our panel of experts …

“Are you on Pinterest?
If so, are you seeing traffic from it?
Got any tips for my readers?” 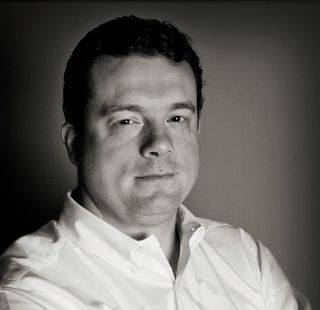 I think Pinterest is really nifty, and is worthy of being part of my Internet Marketing social media strategy. But, I have decided that I don't have time to mess with it. So, I made another decision (that may be instructive).

I decided that since Pinterest does not require using “my voice” in the way that my blog, Facebook or Twitter does, that I could outsource it. So, I identified a (female) virtual assistant that I trust to “figure out what to do with my Pinterest account and just do it.” She has a lot on her plate, so no results yet.

This approach lets me get some traction in Pinterest without distracting me from more important tasks. Since I am not actually using Pinterest myself, I also get to keep my Man Card (the Man Police take your Man Card if they catch you using Pinterest in public).

Pinterest has been very useful for a few content sites. They are on visual topics (food, fashion, etc.) that appeal to women so are perfect for the typical Pinterest user. The traffic has been quite decent for the amount of time we have put put in.

What I find particularly interesting is that Pinterest isn't really dependent on having a lot of followers to be fruitful. People readily search and browse pins by all users, so our pins are largely viewed and clicked by people who aren't following us at all. I believe that one account has about 12 people following it, but if we invest about 30 minutes or so, we can see hundreds of visits to the website from that. It's pretty awesome. That doesn't mean we won't put some focus into gaining a following, but we can take our time building a truly interested audience instead of worrying about follower numbers. If anyone is just getting started, I'd recommend they focus on putting out great pins instead of obsessing over follower numbers.

I have also seen a lot of advice from people stating you shouldn't simply pin your own images only. They say that you should mix it up and include images from different sources. I think this logic applies more to other social networks like Twitter or Facebook where linking to your own site over and over again could possibly get tiring for your followers. After all, a link like an advertisement that the social network user has to click through to enjoy.

However, with Pinterest we aren't talking about links. We're talking about visually appealing photos. From my experience, if your photos are appealing to Pinterest users, they are not going to care that they are photos from your own website. Of course, it makes sense to pin from other sources if you see something worth sharing, but I wouldn't spend time worrying about how much of your content you're pinning. It's just not a concern.

I am curious to see how copyright issues and concerns pan out for the site though and I think they will have some difficult stuff to deal with in the future. Regardless, I think Pinterest has tremendous value and will prove to be a useful tool for users and businesses alike for a long time.

I've been on Pinterest for awhile but I'm not a power user by any means. My pin boards are mostly bare right now.

Last month traffic on one of my niche blogs blew up and stats showed over 1000 new visitors came from Pinterest. That's an attention getter, right? I discovered one of our tutorial series had been pinned by a visitor (see below) and subsequently liked and repinned several times. 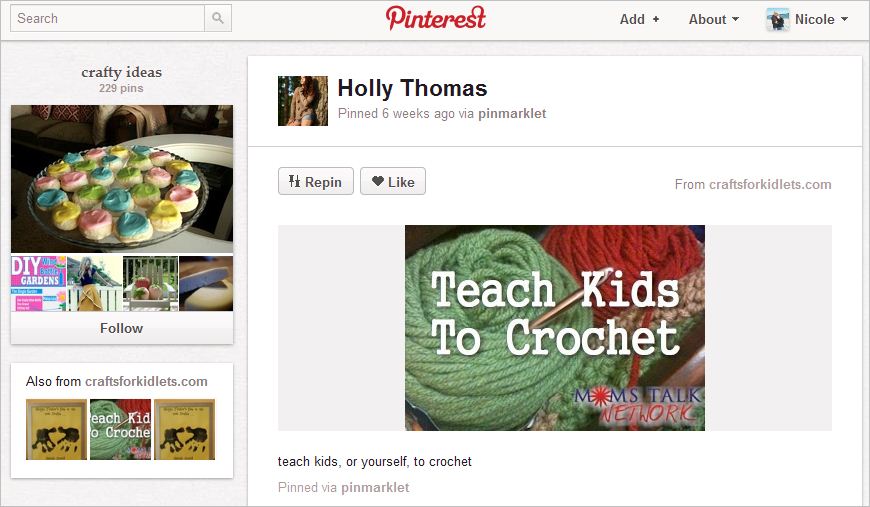 The tutorial was a five part series and just the month before I'd made an image for it and added it to all of the segments. I'm so glad I did – otherwise since the tutorial was video based, I doubt it would have received that first pin.

Now I'm much more thoughtful about the images I place with blog posts and I'm starting to get purposeful about having images with words. An example: 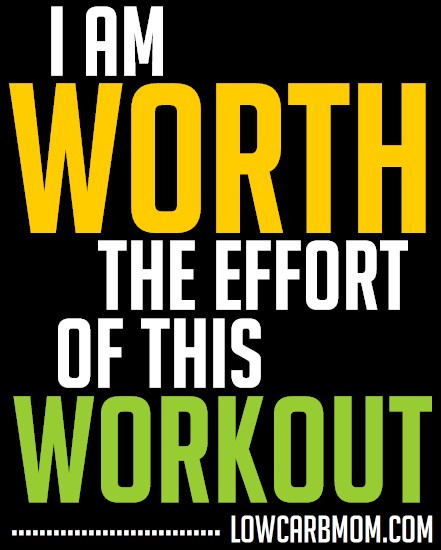 Social media was starting to feel sort of ‘ho hum' and Pinterest has sparked a creative direction so I look forward to seeing how it goes in the long term.

Pinterest caught me by surprise – not that I hadn't heard of it, but that I enjoy it so much!

On my first visit I was hooked! I'm among the 65% of the population who are visual learners – and a lot of your subscribers and followers are, too.

While I haven't tracked specific business from Pinterest, I do know that I've reconnected with people I haven't heard from in years. And they are keeping up with my pins while I am repinning theirs. It's been my most enjoyable social media experience to date.

I love Pinterest. I'm naturally a visual person, plus, I AM a woman between the ages of 35-44, so I am their perfect demographic. 😉

I could spend hours there for fun, but, like Facebook, I limit myself so that I can focus on the projects that I have planned that will directly impact my bottom line.

However, I do enjoy poking around Pinterest with my morning cup of coffee and in between power writing sessions.

BUT – this post is about using Pinterest in business, not just for fun. Which means we need to be strategic in using it, as we would in any other area of our businesses. Right?

Although not all who wander are lost, we do want to have a goal in mind whenever we use a new tool for our businesses.

Let me share this infographic again for you so you can see who is on Pinterest. That's primarily important to know, before deciding whether to even use it or not. For instance, if you sell “male enhancement” products or “hair growth pills for elderly men” – you may skip Pinterest entirely and focus on other avenues for marketing. 😉

Pinterest – The Social Media Darling Of 2012: Infographic by Infographiclabs

There are a few things I'd like to point out that I find fascinating about Pinterest (both from a strategic angle AND from looking at my own stats).

The traffic that I get from Pinterest to this blog is 73.68% new visitors according to Google Analytics. That's similar to the YouTube traffic I get to my blog at 87.5% new people and StumbleUpon at 91.59% new peole. This is completely different from my Facebook traffic which is 41.62% new people. So, this is NEW people coming to my blog. Assuming I didn't totally muck it all up and give these new people the impression that they'd find something like recipes here – this is a good thing. And, on average, they do poke around a bit while they're here. Not enough, though, so I'm going to work on that more.

Did you know that?! So if you're already doing YouTube marketing, get your butt over there now and add your videos. 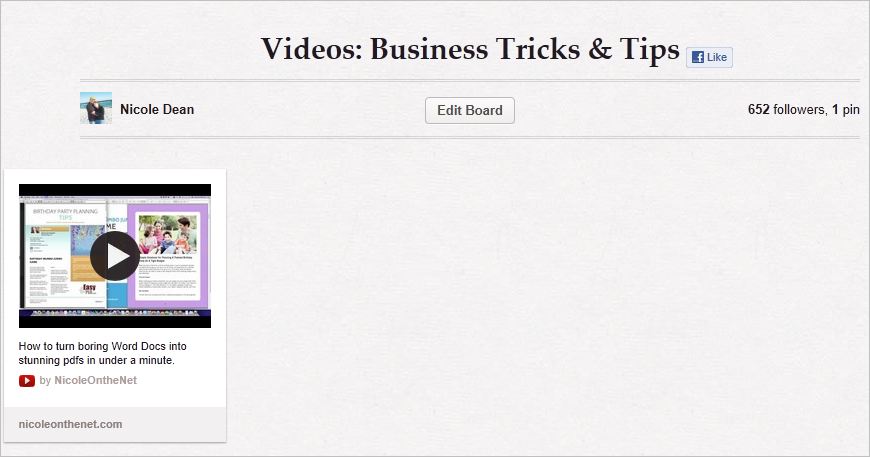 You can see my video board evolve by following it on Pinterest here: http://pinterest.com/momnicoledean/videos-business-tricks-tips/

Images that evoke emotion tend to get repinned more than any other type of graphic I've seen, even compared to most “Infographics” that are intended to inform.

So, if you can take a picture or create a graphic that evokes ANY kind of emotion,  your odds will increase in having it repinned … tremendously.

Make them mad, make them laugh, make them cry or gasp in surprise – and you'll get repinned.

You can have a variety of topics on your wall – but like choosing a variety of niches – make sure you are reaching one MARKET. One person, in particular who would be interested in all of the things you're posting.  Basically stay consistent. You wouldn't put an “I love Rush Limbaugh” on the same account as “I love Stephen Colbert”. It just wouldn't make sense. Just as, if you are in the health field, you wouldn't likely have a fan board for Man vs. Food next to one about nutrition tips.  It would make people confused as to what it is that you offer and what you stand for.

So, I go back to my original words. Choose your strategy – even if you just take a few moments. Your Pinterest board reflects your business and you. 🙂 Have fun with it and track your results and let us know how it goes.

Have a wonderful day!

Be sure to check out this amazing training from Tina Williams and Maria Gudelis all about the changes in Facebook, how to use Pinterest effectively, and how to get on Mobile. But, most importantly – how to tie all three together for the greatest impact on your business.

Join me at the Ultimate Social Challenge.