I mentioned this in my Twitter Mosaic t-shirt post that I’ll be featuring a “Weird Niche Wednesday” from now on. I had so much fun finding the Weird Niches for the post that I did awhile back (here it is: Weird Niches) that I decided to make it a regular feature.

So here we go. I've already got the next few months ready to roll. It was a lot easier than I thought it would be to find odd-ball niches. Either that or I'm very easily entertained?

In my original “Weird Niches” post, I mentioned Pet Strollers. I guess I was raised that you walk the dog the old fashioned way — with a leash. Call me old-fashioned, but my cats never warmed up to riding around in my little red wagon (or going on walks in my backpack), so I never considered zipping them into a stroller. Go figure.

Today, I found the exact opposite end of the spectrum. Instead of animals that are pushed around in strollers — these dogs are put on treadmills for exercise.

Again, what ever happened to taking them to the beach or park and throwing a ball? Or taking them on a run outside? I know, sometimes the owners aren't lazy, but there are medical/health reasons why they can't take a dog on a walk, so I won't judge.

Also, in the name of full disclosure, when I was a kid, I had a very fat cat that I loved more than anything. I put her on the treadmill all the time. She didn't love it. (Surprise, surprise.) I also used to tie a belt around her and try to take her for walks (drags) down the road. Oh, what I did for love… 😉

I must say that this is a very inventive niche. Instead of creating a treadmill site for humans, they put their thinking caps on and reinvented the market.

Clever? Yes. Marketable? I have no idea if these are selling or not.

Either way, I must say that this wins the Weird Niche Wednesday Award this week.

Einstein and Eddy (my 2 puppies) salute you for trying to keep dogs healthy and fit!

Have a great week!
Nicole 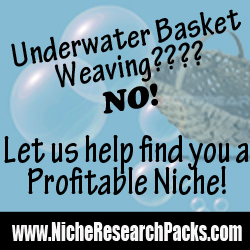