What's the most embarrassing thing that's happened to you when you were on stage, speaking?

(Not webinars, or teleseminars – but actually standing in front of live people.)”

My most embarrassing moment came when I was speaking in front of almost a thousand people. To date, this was the largest audience I had ever been in front of, and I was so nervous about something going wrong. I had just arrived from the airport a few hours before I was to go on stage and quickly dressed and fixed my hair so I wouldn't be late.

After the first ten minutes or so my nerves calmed and I began to feel comfortable presenting my information to the group. I made eye contact with those in the first few rows, spoke slowly enough so they could take some notes, and even told a few jokes that went over well. I began to feel good about what I was talking about and enjoyed being in front of such an attentive audience.

As I was on my closing slide in this ninety minute presentation I dropped the projector ‘clicker' and reached down to pick it up. That's when I realized I had not changed shoes before coming on stage. There I was in my shiny new clothes and fancy hairdo, wearing the beat up old sneakers I wear when I travel! 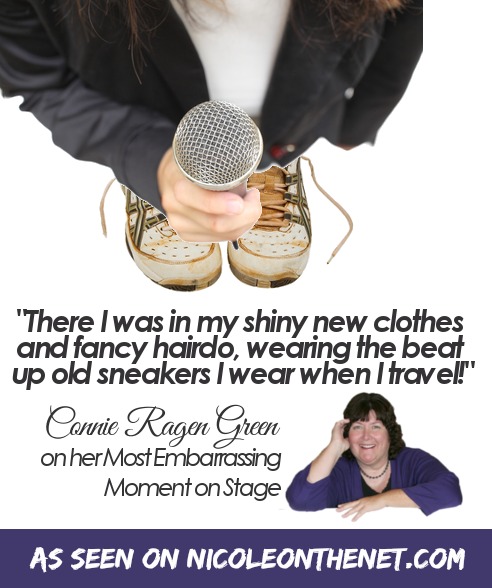 This wasn't from the stage but in a classroom.

When I got out of college, I bought the weekly newspaper in my hometown. So I was asked to come to my old high school to talk to one of the classes since I had become kind of a local celebrity overnight-or at least I thought so.

On my way to the classroom, I was walking down the hall, a very long hall, and a lot of the students were looking at me and kind of giggling.

I thought, “Oh, they recognize me.” So I threw my shoulders back a little bit picked up my pace and strutted the last few paces to the principal's office where my aunt was the principal's executive admin assistant.

I thought I go see her before I gave my brilliant talk to the class.

At the principal's office, I stood in the doorway and yelled across the room to my aunt, “Hey Phyllis, I'm here.”

She said, “Glad you're here, but don't come in until you zip up your pants.”

I looked down and immediately I felt so out of place in my high school again with my shirttail hanging through my barn door.

I have no memory of what I said to that class that day.

I've only spoken in front of live groups a few times now and thankfully I don't have any big faux pas stories to tell… yet.

From the very first time I was invited to speak, I admit I was nervous about it. I had some public speaking experience but was far more comfortable sharing knowledge from behind a microphone. Why? Well, because I'm overweight.

Standing up in front of a crowd is intensely uncomfortable for some people because of the crowd. Not so for me. For me, it's all about me.

Obviously, I don't let it stop me. I'm uncomfortable but I do it anyways.

Two years ago when I got to teach at NAMS, I was thrilled to discover that I'd be speaking in one of the amphitheater rooms because they have chunky wood podiums to stand behind. It felt like a nice big safety blanket.

I got myself all set up at the podium – only to discover at the last possible moment my ‘clicker' that controlled my presentation slides wasn't working. My wonderful AV aide scrambled to try to solve the issue to no avail… I ended up having to come out from behind that beloved podium to stand out in the open by the laptop to manually control my slides.

I had to laugh at my silly insecurities and simply get over myself. I did and enjoyed the heck out of that session.

Looking back and thinking about every opportunity to speak or appear on a panel since then, I'm glad that I haven't been able to hide. I've received many wonderful compliments and notes of thanks for other big women who tell me they feel encouraged when they see me speaking and teaching.

I was suppose to speak at JV alert for 15 minutes. I planned to use ‘presenter view' for my notes. For some reason ‘presenter view' on that setup did not work and I had no back up plan. I was sweating for first 5 minutes, then recovered and went well.

That was very embarrassing to me and lesson LEARNED to be ready for PLAN A…Z.

I was brought in to put the hammer down on a company. I mean level them. Then during the intro the guy said, “Paul Evans is one of the funniest speakers I've ever heard. You will love him!” I got up and said, “Guys, no funny stuff today. I'm here to rough you up a bit because you've… ” They erupted with laughter. It only got worse from there.

Well, I guess I've had more embarrassing moments than most since I had no problem in coming up with several. 🙂

There have been several times when I've been about to speak at NAMS and my presentation wasn't on the laptop in the room. It's all MY fault of course, since the organizers and aides are juggling 60 different presenters and I *may* have turned in my speech last minute (ie. the night before). But on two occasions, I have had to run to my hotel room to get my PowerPoint slides at 5 minutes before I was to start, mid panic, while everyone patiently waited for me to come flying back into the room, sweaty and out of breath, hair all askew, and kick off my shoes and begin. 🙂 Lesson learned. I just bring my own laptop with me whenever I speak … just in case we need to move files over.

My favorite “most embarrassing moment” though, is an easy one. But…

It's not the time, I had word-soup and swore on accident just by mashing up the two words I was trying to say. (I tried to say “business” and “niche” and it glopped together.) And the worst part was that my son was also in the room as he was part of the event and he yelled “MOMMY!” oops!

It wasn't the time I didn't realize we had started recording and I made a joke to the person I was talking to up front about something silly related to underpants. I can't even remember it now – and I'd asked David to have the aides edit that out – so hopefully there's no evidence. Poor David. I don't know why he has me back! (Oh yeah, because I'm AWESOME! lol)

And it wasn't the time I introduced myself and realized that I had a little “visitor” in my nose and it was going to probably fall out at some point during my talk – so I asked if anyone had a tissue. Four people came running down with tissues out. So sweet.

No, my most embarrassing moment on stage wasn't even my fault!

I was up front, rockin' it when this elderly gentleman popped out from behind my big screen. I didn't even know there was a door back there!

Seriously, he had to have been 102 years old and he was carrying BUG SPRAY. Yes, an industrial size container (strapped onto him) and he proceeded to start spraying around the edges of the room.

I wasn't really paying attention too closely because I was in the moment, and he was nearly done, when I saw people start to pull their shirts up over their faces and move to the center of the room. But, of course, the crowd was so awesome (and full of my friends – including the awesome Bob Jenkins) that they didn't run screaming.

The little old man disappeared back behind the screen at which point, I had to look to see if he was just hiding or if there was a door. (There was.)

All of this happened in seconds, but when I replay it in my mind, it seemed to go in slow motion.

Of course, I called a break and everyone ran out of the room.

We went back in after we aired out the room and I wrapped up my talk in record time.

And, that, my friends, is my most embarrassingly odd moment from stage. 🙂

You can't make this stuff up!

I shared everything from wordsoup to nose crusties — what's your weirdest or most embarrassing moment from stage? Inquiring minds want to know.

Talk to me. Public speaking yay or nay?

Also, do you do public speaking?

As Jerry Seinfeld said: Research shows that approximately 40% of people are more scared of public speaking than they are of death. This means that at the average funeral 40% of those present would rather be in the coffin than give the eulogy.

If I can get up and talk in front of people as an extreme introvert while all this junk is going on around me… you can do it! 🙂

PS. If you want to see what craziness happens next, be at the next NAMS. Sign up here: CometoNAMS.com