“This one is for those of you with older kids. What are you actively doing to encourage their entrepreneurial spirit – and increase their financial IQ?”

My step-kids are so old they have kids of their own now, and we have encouraged them to be entrepreneurial since they were little tikes.

My oldest grandson is seventeen now and has a variety of projects he is involved with. This includes some niche websites, but also businesses he has created to help offline companies where he lives. He has aspirations of being a film maker, so he makes videos and sets up YouTube channels for his clients. He does so well that he paid for one third of his new car a few months ago, making me and his parents extremely proud.

As far an increasing his knowledge of finances, he reads books and magazines on this topic, as well as taking courses geared for young entrepreneurs at the local community college. I've even learned some valuable things from the information he has shared with the family.

Dr. Mani of How to Set Goals says:

The key to entrepreneurial success, imho, is pursuing something with passion which will add value to others. The money typically follows, but the desire for profit is a good motivator to get past the hurdles and pain of starting out.

My teenager doesn't get an allowance – she gets tips, advice and guidance on projects that can help her raise the money she needs for whatever purpose is top of mind at the moment.

I still recall with amazement when she was 5, wanted a Barbie doll (Princess Anneliese, anyone?), and when promised a ‘matching contribution' to what she raised, coming up with the staggering sum of Rs.1250 – in just 5 days! (She crafted hand-made cards, and sold them at “extortionate” rates to grandparents, btw)

The philosophy of “singing for your supper” continues to this day, with very encouraging results. Baking and writing are the new card-making – and prices are more “real” 🙂

We discuss money and finance, both in the abstract and in terms of tangible impact it can have – on lifestyle, on attitude, on belief systems.

Nothing is “out of bounds” in these discussions, and by being forced to justify expenditure choices/decisions, we (parents and teen) both have gained better insight into financial/fiscal responsibility. 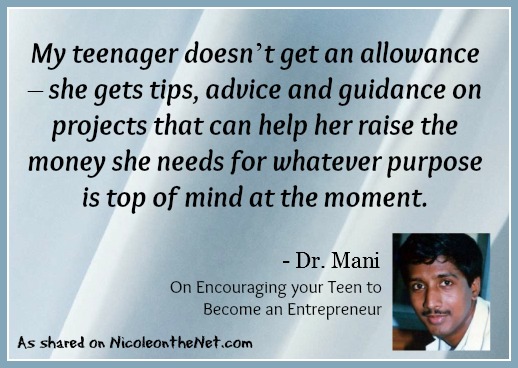 Another technique we started (but didn't sustain) is the 3 envelope method I learned in a guide.

You divide the monthly allowance (what's that?! we replace it with project profit) into 3 equal parts, to go into 3 envelopes… labeled ‘spend', ‘save' and ‘give'.

The first is to enjoy now. The second is to invest (an opportunity to teach investment principles here). The third is to donate to worthy causes and those in need.

In the few days we did practice it, the impact was dramatic – especially in the last category. Imagine a 7 year old buying her favorite candy bars… to distribute to street urchins near a temple. The joy and smiles on those little faces is priceless… as is the knowledge that my little one learned a very precious life lesson. 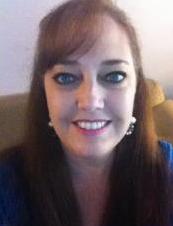 Kids are funny! I have three kids – ages 20 (Dylan), 13 (Shawn) and 8 (Scarlett). They would LOVE to have the money I make, and they get all inspired to launch something, but they only want the tip of the iceberg – not the hard work involved.

I think part of the problem is that during my hard working, struggle years, they were too young to see the elbow grease I had to put in just to earn enough to pay the bills. They see it as “automated” now.

But that automation was from previous working hard to develop residual income streams. So what my kids will do is get all excited about Squidoo or a blog and they’ll launch it, post content for a little while, and when the money’s not there, they quit, get bored, etc.

Now Dylan did see some success a few years ago. He wanted an air soft rifle that cost $300 and I wasn’t going to do that. So he created three lenses on Halo – the video game. They ranked SO high because he was a gamer and spoke their language.

He asked me to sell them to my list and I did – he got $100 per lens, enough for that rifle. Right now, he works at a local restaurant/bakery in catering and he’s very happy with his pay raise – but what he makes in a month is what I make in maybe half a week.

He thinks it’s insane, but yet he doesn’t sit down and say, “TEACH ME!” I think kids have to do their own thing for awhile and I hope someday he’ll want to learn. Every time he complains about co-workers or a boss or a customer, which is rare for him, I do nag him about not having those problems as an entrepreneur.

Shawn has his own gaming blog. He’s diligent about developing content. He was so proud of his header – he did it himself – but it needs a professional one. It also needs some sort of monetization strategy other than the AdSense on the sidebar.

But I don’t have time to go through and link to each game. He created this site: gamingscout.com and he enlisted the help of two of his classmate friends to create content. They review games they like, etc. Shawn initially wanted to be a game tester, but I explained that he wanted to follow in John Reese’s footsteps and launch his own gaming company. 🙂

Scarlett wants a fashion website – but I haven’t launched it yet for her. She wants all sorts of fancy stuff I have no clue how to help with, like games for girls, etc. And I know she’ll be disappointed if it’s not earning the same kind of money my sites do.

All three of my kids are watching my “Debt Dragon” journey. Although I’ve been earning six figures for awhile now, we spent beyond our means – and they’re learning about that, about paying cash, etc. My oldest is already a saver and an earner – not a wasteful spender.

It takes time, and we can’t get frustrated when our kids don’t have the same entrepreneurial spirit that we have. They’re just kids. But I do hope one day they learn the ropes so that they’re never at the mercy of the job market. 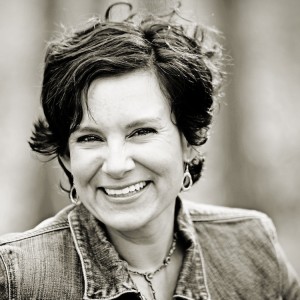 I've asked my kids to pick a topic they're excited about and we've been creating content — blog posts, videos, etc. They each have a WordPress blog they toy around with, and I'm actively helping them learn the skills I wish I'd known.

Also, just exposure to entrepreneurial ideas helps a ton. We watch “Shark Tank” and talk about the investors' decisions and the pitches. We also listen to business podcasts together. Not every day, and not religiously, but enough so they are familiar with the ideas and terms.

I started working at home when my son was eleven and I remember how impressed he was when I started to ‘make money out of nothing' at the computer. As my online success grew and I said goodbye to the day job, he was proud of me.

We're both stubborn and a bit rebellious which can make working for others difficult. I thought for sure he would follow in my footsteps and pursue self employment but that hasn't happened yet.

Every now and then I try to sow seeds of interest. I know he has what it takes to be a solopreneur like me – I just don't see the hunger yet and to be honest, that frustrates me a little. I can't ever remember a time in my life when I didn't want ‘more' from my work.

This is where I remind myself that he's young, there's plenty of time for that spark to develop. When and if it does, I'll be so happy to lend support. Until then I'll just keep building and improving my own business – making this self employed life look GOOD from the outside 😉

Seriously. Like a video-game playing slug who doesn’t shower.

We’ve done a few things to help him to have a productive summer – while still having time for fun – and hopefully learning a few things about productivity, scheduling, intelligent financial IQ, and entrepreneurship. (Which, in my opinion are topics that are seriously lacking and under-taught in schools.)

Here are a few ideas for you to steal from me.

My kids, as I’ve mentioned before in my “Surviving Summer with Kids at Home” have a weekly task chart broken up by days.

It’s just an excel spreadsheet that they check off every day as they are accomplishing their tasks.

If my son takes it upon himself (takes initiative) to complete his tasks daily without being reminded – or comes up with extra tasks to do – he gets a cash bonus. However, if I have to ride and remind him to do things from his list, he gets nothing extra – just room and board.

My son is currently going through the CodeAcademy.com training. (It’s free.) It’s a great program and he’s picking it up pretty quickly.

My husband wanted to pay him hourly to do the CodeAcademy training but I flat out refused that. Instead we are going to give him a big bonus at the end, if he can demonstrate thorough knowledge of coding when he finishes.

(Translation: If he takes his time and initiative to go through the course, he will be rewarded – no matter how long it takes him. To me that's much more of an entrepreneurial attitude than an employee mindset. Don't you agree.)

As part of my kids' daily tasks they must read a “mom approved” book. My 16 year old reads two hours a day and my younger daughter reads 45 minutes a day.

Mom approved books are getting much more practical over the years. We rotate fiction with a non fiction book, like “Rich Dad, Poor Dad” or a book about “Teen Entrepreneurs” or a Steven Covey book about Time Management – all good stuff that I wish I had been asked to read at a younger age.

Considering the kids have reading on their lists, they have to do it before technology comes on. Pretty sneaky, right?

4. Exercising his Most Important Muscle.Both of my kids also doing Lumosity.com – which is a brain training program. I’m doing it, too, and we’re competing on our progress. I'm pretty impressed at our progress. My memory has improved tremendously already.

Your turn.
What are you doing to encourage independent thought and initiative and financial knowledge in your teens?

PS. I'm getting so many good ideas reading this that I'm thinking this should be a Kindle book. What do you think? Want more of these ideas?