I've been asked to be on several Google Hangouts recently. And, once I figured out the technology (well, at least figured it out enough that I can muddle through) – it's lots of fun! But, is it worthwhile from a business standpoint?

Hangouts are all the rage these days.

Are you doing them? And, if so, what are you finding that works well? 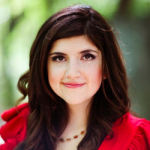 Rachel Rofe of How To Get Every Book You Write Onto The First Page Of Kindle says:

I've done a few Hangouts. My favorite was the one I did on Christmas to hang out with people who had nothing else to do. A lot of other fantastic marketers joined me, and I think it helped a lot of people.

I haven't done them in a major monetization sense yet, but I'm looking forward to playing with them and seeing what happens. I can't wait to read other peoples' answers on this!

Learn How to Never Have a Bad Day again:

click here to learn tips from Rachel for staying positive

Yes, I've gotten on board with the hangout rage, and love them. I don't think Google really has all the bugs shaken out yet, because sometimes people have trouble getting on the panel, and a couple times people that do have a webcam aren't showing their video, but still…

I love the fact that you can see everybody on the panel at once on the bottom of the screen, it makes it seem more like watching television, and the personality of the participants can come through. 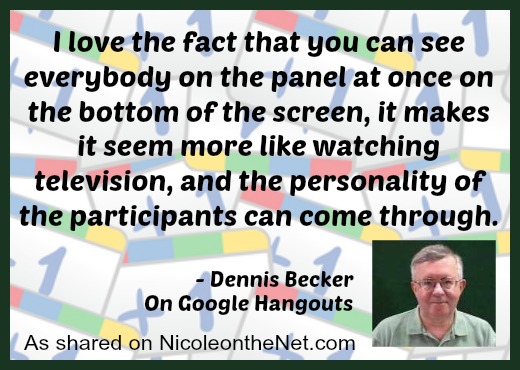 On Webinars vs. Hangouts:

I've been doing webinars for quite a while now, and are used to them, and they just aren't as much fun, I don't think. Plus there are always challenges with webinars in getting the replay recordings.

With hangouts, the recording is uploaded to Youtube in just a couple minutes, with GTW, it would take me sometimes half a day to convert the recordings, upload them to my server, and send out the links… and that would be on a good day.

So yeah, I'm having fun with hangouts, here's an example of one or our more recent ones that I think went relatively well:

Be sure to check out Dennis’ group over at Earn1KaDay

We’ve been doing weekly Hangouts for Contentrix.com for the past few months. It’s just a casual everyone-welcome type of thing as we get to know the technology.

We have one more Hangout before the summer, but then we’ll be back in September.

You can see our most recent Hangout here.

It’s about using PLR to boost your business, so might be of interest to you as well.

The Hangouts are a lot of fun, but sometimes, it’s a little difficult to navigate. Inevitably, someone will have trouble finding the Hangout or connecting, but as people get more familiar with the technology, it gets easier. Just be prepared to give your attendees a hand and if your Hangout is attached to any sort of paid product, go the extra mile in ensuring they don’t miss out.

The Hangouts on Air feature allows you to live broadcast your Hangout via YouTube. It also records the video for you, so it’s a super easy way to create video content.
If you or your attendees have any trouble getting in, try using the Chrome web browser. It seems to be optimized for Google+ (we learned that when Nicole herself had trouble getting into one of our Hangouts).

For improved performance, use a wired Internet connection. While wireless works well for some, the connectivity will generally be better with a wired connection.

Overall, just relax and have fun. I’m not a video person myself, but I do enjoy the Hangouts because they can be an actually conversation, rather than me sitting in front of a camera and yacking away. It certainly depends on your goal with the Hangout, but I always encourage participants to speak whenever they have a question or have an opinion or tip to add. It’s much more interesting to get a variety of perspectives in on the conversation.

Check it out here

I am not currently doing hangouts. I've seen so many poorly presented hangouts that were just a waste of my time that I hesitate latching onto yet another new technology.

I generally do not do “face” videos, so hangouts are not the appropriate technology for my comfort level. However, I can see their value when used properly, particularly for truly informal chats – or as a substitute for a webinar.

Want to Get More Organized in your Business?

Jeanette has got you covered

I am experimenting more and more with Hangouts these days, not so much as an alternative to webinars but as a different way to communicate. My favorite use of them by far is for private mentoring sessions with some of my clients. It's almost like being in the same room with them and we are accomplishing so much our time together. I use a new YouTube channel I created just for this purpose so they're really private Hangouts. As with anything new, practice makes perfect, so keep on ‘Hangin' Out' to see if this is for you.

I am doing hangouts at least once – more like twice per week now with my subscribers and the public. I am finding that the engagement is really well received and my view count is going through the roof on Youtube. People are able to interact easily – and feel like they get to know you better – if they can see a face – and relate to it.

branding – heck yeah – the branding element alone is worth it.

I have found that the increase in responsiveness to standard emails is greatly increased, because the same people that pick up the emails – also saw me on a hangout in the last few days.

I can positively say that the results are ALL good.

I don't have a whole lot to say on this topic. In fact, I asked the question because I wanted to see what my friends were doing that is working well. Sneaky, aren't I? 😉

The one thing that's really holding me back from Hangouts is the same thing that keeps me from doing video in general. I don't do 2D well, as my husband says. lol. Translation: I look goofy on video and in pictures, apparently. (Thanks, honey…) But, it's true. So there you have it. I don't have a face that flattens well, I guess?

Anyway, it's so hard to get over that self-consciousness that I don't know if I want to do it. Although, I know if I do video enough I'll stop feeling so yucky on camera. So right now, the only hangouts that I've done have just shown a picture of me on the screen rather than video.

And, yes, the learning curve for the technology is a bit of a pain. In my first hangout with Alice, I wasn't able to even get on until 20 minutes into the call. And, in my Hangout with Dennis, I tried using my iPad so that I could use a video camera (yes, I got brave that day) – but the app just crashed. So, I'm hoping the technology will improve so that it's a friendlier option to really hanging out with coaching clients, in mastermind groups, or in teaching classes.

Are you doing Google Hangouts? If so, got tips or examples for us? Please share.