From Nik: While I'm off dealing with adoption paperwork, I've invited one of my favorite people and former coaching client, Lain Ehmann, to share some of her patented irreverent thoughts on the topic of online business with you.

I know you'll enjoy her post — and I know you'll LOVE the offer she has at the end of this post! Read on for more!

Learning about Blogging from the Olympics

Seeing the recent Olympic acts of derring-do brings to mind tales of athletic accomplishments of days past. And for me, I can't think about the Olympic Games without thinking of the most incredible Olympic victory of all time.

Yes, that's right – I'm talking about the incomparable (and fictional) male-male pairs figure skating team of Michaels and McElroy memorialized in Blades of Glory, starring Jon Heder and Will Ferrell in Paramount's 2002 comedy. Next to them, Comaneci, Torres, and Phelps are mere footnotes in Olympic history. 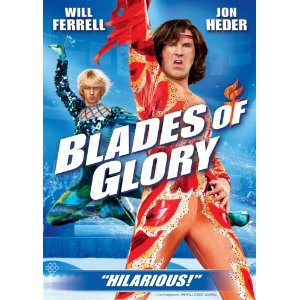 If you're not familiar with the story, the two are originally individual male figure skaters, but due to an unbridled rivalry, they get barred from the sport. Both hit rock bottom, but after a visionary coach sees their potential, they join forces for the first-ever male-male figure team. I won't ruin the tale for you, but suffice it to say that after hills and valleys, and challenges both internal and external, Michaels and McElroy emerge triumphant, with gold medals in hand.

Of course, being an internet marketer, I've got to find a way to relate this story to online business. Never fear! I've got you covered. In particular, the Dynamic Duo can attribute their success to three principles that online business owners and bloggers can learn from:

1. Get a coach. If it weren't for the foresight, dedication, and experience of their coach (played by “Coach” himself, Craig T. Nelson), Michaels and McElroy would never have made it out of the practice rink. Their coach led the way to success, helping the two sidestep possible problems, overcome challenges, and shortcut the learning process. The same is true for online entrepreneurs! I personally can attest that my online business coaches (of whom Nicole is one!) have cut YEARS off my learning process. I would never have made it to six-figure status in 18 months without their assistance. I counsel my readers to get a coach, or flail. It's that simple.

2. Make it about the audience. Not until Michaels and McElroy give up their selfishness and focus on wowing their audience do they truly become gold-caliber competitors. Too often, I see bloggers and website owners refuse to make changes to their business — or their blog — because they're focused on themselves rather than on their audience's experience. From hard-to-read fonts, to an unfocused blog post, to tweeting about their cat's breakfast… the focus needs to be on your audience, not on you and your personal preferences. Sure, you can run your business according to your choices, but don't be surprised if your readers and customers give their business to someone a little more concerned about them.

3. Maximize your “secret sauce.” The most remarkable this male-male duo had going for them was their physical strength, so they designed a routine that made the most of this element. They performed feats that male-female teams couldn't begin to dream about, and it made them stand out against their competitors. I encourage my clients to identify their “love potion,” the thing that will distinguish them from the rest of their market make their target audience fall in love with them. Without a distinguishing characteristic, you become a commodity, interchangeable with your competition. From mad technical skillz, to charisma on-camera, to an off-kilter sense of humor, what's YOUR secret sauce?

Finally, a parting note… After they performed, Michaels and McElroy left their audience and the judges with a clear sense of what's next — to give them the gold medal. There was no question about “where to click,” “what to do,” or “where to go now.” Are you leaving your blog readers with the same sense of direction? Let them know what to do and how to do it, and then be prepared to take your spot on the winner's podium.

About Lain: Lain Ehmann created a six-figure online business in the scrapbooking industry in just over 18 months. She shares her secrets as well as interviews with other successful online business owners at http://www.businesslovepotion.com.

P.S. From Nik: Lain specializes in helping online business owners identify how to make their blogs more effective and appealing to their readers through her “9-1-1 Blog Diagnosis.” She's already helped dozens of online business owners pinpoint what elements are keeping them from online success — and she can help you, too!

Lain has an exclusive offer for NicoleOntheNet.com blog readers. You can get a personal video blog critique, plus over $50 worth of bonuses, for a special rate. Save $30 with coupon code “Nicole” through Saturday, August 4. Claim your 9-1-1 Blog Diagnosis NOW!