I've had this blog post in drafts for quite some time, but just hadn't posted it. I was going through my many drafts and found it and boy was I embarrassed. I thought I'd posted this a long time ago. oops!

So, grab a cup of your favorite drink. (I've got a glass of Merlot. Go ahead and grab something yummy. I'll wait.)

I didn't particularly care for him. 😉 I felt he was a bit aloof.

Normally my gut instinct on people is dead on. But, I totally missed the boat on this one.

I met this same guy again in January of this year (again at NAMS) and he grew on me. Quickly.

(He says that there's about a six month grace period before people like him. He's funny like that.)

Anyway, in January at NAMS, we were hanging out in the hotel lobby telling stories and I told one from many moons ago back when I was working at a camp, the summer after I graduated from high school.

You see, I was a camp counselor (I lived at a girls camp that summer).

One week, we decided to go on a field trip with our girls to an air show that was nearby. I had 6th grade girls most of that summer and that was the age of this group.

Well, one of the girls was having a rough time. I think she struggled a bit, in general. I don't know her whole story, but she was certainly not happy to be at camp or to listen to me most of the time. It didn't keep me from trying, though.

Obviously, when the van pulled up at the air show, I was planning on keeping close watch on her. So, when she left the van with her backpack on, I took note. I knew it was none of my business as to why she wanted it with her, but I was concerned — and I was right.

As we were walking, I kept noticing she was looking over her shoulder so I stuck close. And, sure enough, she took off.

Well, as an 18 year old girl, what do I do? I run after her, not thinking about what would happen when I caught her. I just didn't want to lose her in the crowd.

So, I ran after her and eventually caught her — which became a problem. I called her name a few times and it only made her run faster, so, eventually I tackled the poor girl in the gravel.

You can imagine the faces of the people around us, staring at us. I figured I'd be talking to security in minutes. I mean, an 18 year old tackling a 12 year old? Not pretty. Plus we were both pretty scratched up and sweaty. I'm sure we were pretty scary looking.

I had no idea what to do. Obviously this wasn't in our pre-camp training. So I held up my little wooden name tag that had my camp name on it (not even my real name) and yelled “It ok. I'm a camp counselor!”

For some reason, that appeased the onlookers and they started to walk away. (Bizarre, right?!) So, she and I stood up, patched ourselves up, had a long talk, and we went back to the field trip.

Well, after that day, she and I bonded. That girl wrote to me for years after that. I often wonder about her to this day and hope she's found happiness.

Well, this story makes me giggle to this day, and I was laughing (and probably snorting while laughing) while telling it. I mean, a wooden name tag? GEEZ. But then NAMS ended and I went home and forgot completely about sharing the story.

When I got home from NAMS, Dan emailed me and asked for my address. He said he had something he wanted to send me. I figured it was a greeting card or a business card or motivational CD or something. You know. The usual stuff – which is all very thoughtful.

Well, I got a box in the mail. When I opened it I found a framed picture of this: 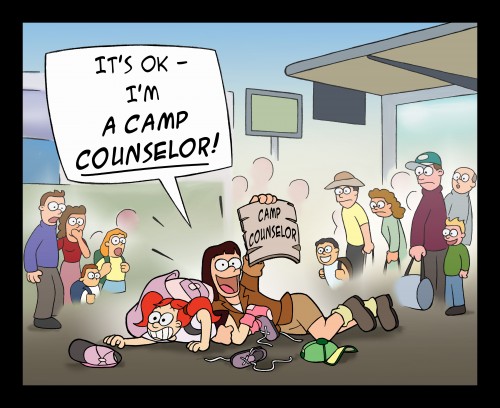 Yes, Dan had commissioned a drawing of the story that I had told. And, I laughed my butt off. (My favorite part is how all the adults look horrified, but the kids are all smiling.) lol. So true! It is now hanging in my office and it's one of my favorite gifts ever.

What did Dan do that was right?

And, for that, he made a friend for life.

You ever hear of the law of reciprocity?  Well, this post is the start of it. And, yes, you can bet, when Dan needs something, I'll do my best to help.

If you'd like to get to know Dan Morris, check out his blog Letters from Dan. He's someone worth knowing.

Thanks for sharing my story time. And, have a great day!

PS. If you'd like to hang with me and Dan and a bunch of other cool people, please join us at NAMS in January.