The answer is simple. You make the choice to be.

In fact, that's the topic of the next graphic in my series this week. 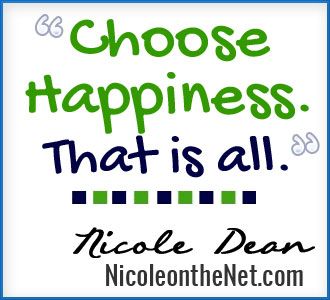 There are countless examples of people who faced insurmountable challenges who, despite their suffering, they would still count themselves to be happy. Because they chose to focus on their blessings (no matter how few) rather than sinking into the abyss.

One of my favorite books on earth is “UnBroken” by Laura Hillenbrand who is also the author of SeaBiscuit.

Any time I feel that my problems are big and I start to sink into anything less than completely appreciating my life, I think of this book.

It's the true story Louis Zamperini. On a May afternoon in 1943, an Army Air Forces bomber crashed into the Pacific Ocean and disappeared, leaving only a spray of debris and a slick of oil, gasoline, and blood. Then, on the ocean surface, a face appeared. It was that of a young lieutenant, the plane’s bombardier, who was struggling to a life raft and pulling himself aboard. So began one of the most extraordinary odysseys of the Second World War.

In a life raft made of rubber with no supplies, Zamperini sat. Ahead of him lay thousands of miles of open ocean, sharks, thirst and starvation, enemy aircraft, and, beyond, a trial even greater that made him wish he was back on the raft.

Driven to the limits of endurance, Zamperini would answer desperation with ingenuity; suffering with hope, resolve, and humor; brutality with rebellion. His fate, whether triumph or tragedy, would be suspended on the fraying wire of his will.

Louis Zamperini – you are my hero. Thank you for telling your story. You touched my life.

Have a GREAT day everyone!